HOW IT ALL BEGAN

Pastor Robert Park’s passion for Q-ba started in 1998 when he took the first step of faith by flying to Havana without having any personal connection. After checking into a hotel, he stopped the first person he met on the street and asked to be taken to a church. After walking in the sweltering heat for about half an hour he came to a house church. This was his first encounter with Q-ba’s underground churches.

After making several trips, the Holy Spirit started to reveal what was most needed in this island nation-equipping the saints! Everyone was speaking in unison about their desire to be trained. Because there were no Bible schools and very few seminaries in the country at the time, even the most committed and successful house church leaders had received little or none of the training they needed.

That is how LIT en Q-ba started in 2002. The two- year Bible Institute would train the Kingdom workers with emphasis on church planting (LIT stands for The Learning Institute of Texas in Houston which was founded by Pastor Park in 2001). As Q-ba is a communist country, the only possible means of advertising was through word of mouth. We just prayed that God would send at least 12 students just as Jesus had 12 disciples. But God had a different idea – He sent 145 students on the first day!

HOW LIT EN Q-BA BEGAN – ON THE STREET 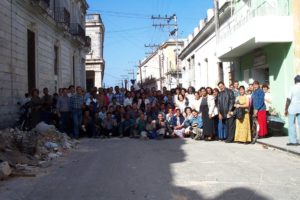 Shortly thereafter, God showed us the need to plant churches in the rural areas of Q-ba. We discovered that outside of the big cities, there were very few churches in the countryside. This was how the Holy Spirit led us to start a church planting movement in Q-ba.

From the 74 first graduates, 12 were chosen to find un-churched areas and plant churches. Several Christians from the U.S., Canada, and Korea pledged to support these missionaries for 3 years.

One of the first churches planted was in a small town called Amarillas by a couple named Janet and Elieazer.  Amarillas at the time had about 2000 residents who had been under the dark influence of Santaria worship. The entire town began to be transformed by the power of the Holy Spirit and the dedication of the couple. The ministry started with the couple ministering to the little children who were drawn to singing. Soon they reached out to their mothers, who in turn brought their husbands and neighbors. The town’s notorious 70- year old drunk was touched by the Holy Spirit and was later baptized. He married his life-long common-law wife in the first Christian wedding the town had witnessed. A Santaria priest received Jesus and burnt all the idols and the whole town was liberated in Jesus!

A 70 YEAR OLD MAN BEING TRANSFORMED 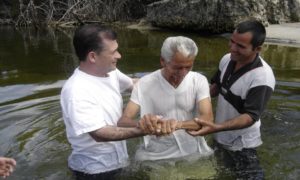 There are too many testimonies like this to share on a limited space. A countless number of souls have been saved and many have committed their lives to the work of the Lord Jesus. Churches are reproducing other churches and new disciples are being made every day.

As of January, 2020, LIT International has planted 324 churches in Q-ba and is operating  LIT Training Centers in 34 locations across the nation. The ministry is headed by Isidro Perdomo, National Director.

HOW YOU CAN GET INVOLVED

You can be a part of this Holy Spirit Movement by: